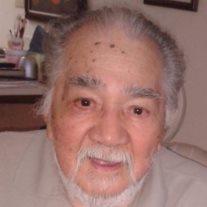 Macario (Mac) Vega Vasquez, 83, of Mesa, Arizona, formerly of Los Angeles, died Sunday while in the care of Hospice of the Valley after a brief illness. Mac was born May 24, 1930 in Bakersfield (Arvin Farms), CA. He grew up in Los Angeles in the Bunker Hill neighborhood. He worked for the U.S. Postal Service for most of his career before retiring to Mesa in 1990. Mac loved the outdoors. He spent many years camping, fishing, scuba diving, and traveling. Mac also loved to express his creativity through paint and photography. Mac spent most of his years in Arizona living at “The Springs of East Mesa” an assisted living facility in Mesa where he made many friends and will be remembered as the one who “always would greet you with a smile on his face”. He is survived by his sister Angie Salcedo, CA; stepson Guillermo Hernandez, Chino Hills; sons Fred Vasquez, Los Angeles; Ricardo Vasquez, Tempe, AZ; and daughters Susie Vasquez, Los Angeles; and Arleen Vasquez, Glendora, CA, and numerous grandchildren and great grandchildren. Mac will be remembered in a private memorial service in California in the Spring. Donations can be made to “Hospice of the Valley” www.hov.org or “Arizona Burn Center” http://www.maricopahealthfoundation.org. Arrangements by Bunker’s Garden Chapel.