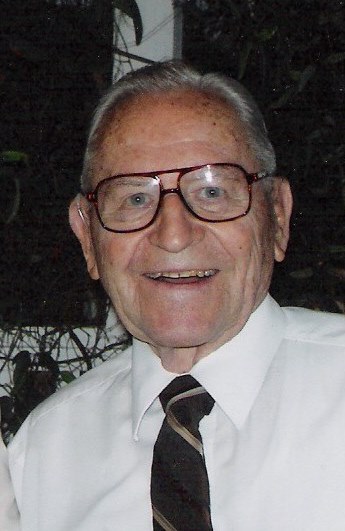 Loren Alva Cluff was born on September 27, 1919, in Webb, AZ to parents, Mary Hazel Porter and David Nelson Cluff.  He was the 6th child in the family of 8.  However, he ended up being the youngest because his two younger siblings (twins) died when they were young.  His mother also died shortly after giving birth to the twins when Loren was not yet 2 years old.   Only 4 siblings survived their childhood and they ended up being raised by other family members and friends.  Loren lived with his maternal grandparents and some very dear friends after his mother died and then with his father.

Loren was bright and skipped a couple of grades in school so he graduated from the 8th grade when he was only 11 years old.  His father came and got him and he worked and lived with his Dad in the Santa Rita Mountains looking for an old gold mine.  Loren learned to shoe the horses and burros at the store/dude ranch where they would buy their groceries.  He got his first full-time job at 15 years old at the store doing chores and working in the store.  He lived in the guest cabin next door.  He had the opportunity to stay with a family in Tucson and attend school.  His dad was against it – he wanted him to remain with him and work with him to find the old mine, but after 5 years, Loren decided on his own that his dad was never going to find the gold, so he decided to go back to school.  Loren started at Roskruge Jr High in 1935-36.  Had a part time job all year and also sang and played the guitar in a Cowboy Band.  In 1936-38 worked with older brother Marvin in the wholesale produce business.  Loren graduated from the 9th grade and then later took the GED tests and a correspondence course in US History and received his HS graduation in 1949.  Entered San Jose State University and by 1954 had received a BA degree and a General Secondary Teaching Credential in Spanish and Business Education.   He taught high school one year (1954-55) then went in the roofing business for 2 years.  In l958, Loren received his Masters in Teaching and taught high school for the next 11 years.  From teaching he went into HS counseling.  He did his postgraduate work at Stanford University and received a General Pupil Personnel Credential from San Jose State University.  Retired from Counseling in 1977 and went back into sales:  roofing, real estate, then retired in 1981.

Loren served a mission for the Church of Jesus Christ of Latter day Saints in the Spanish American Mission from 1939-1941 (2 ½ years).   He was drafted into the Army in 1942 when he got home from his mission.  He served for almost 4 years.  During his army service he trained and worked as a company clerk overseas and often drove a jeep.

Loren married Trudy Duncan in 1956 and they had 3 children together:  Debbie Woodland (Carl), Bev Hiatt (Lamoyne) and Sue Cenatiempo (Scott).

Loren enjoyed music.  He played E flat alto sax and clarinet in the Babe Vindiola Orchestra.  He played the clarinet in the military band while serving in the army and he also sang and played the guitar in the Kaler’s Cowboy Band as a teenager.  He loved to lead the music in Priesthood meeting well into his 90’s.  He was often asked to sing and play his guitar at many church events.  And we could often persuade him to get out his guitar and just sing and play for his family.

Loren enjoyed hunting and was involved in the deer hunt just about every year until he retired.  He also enjoyed fishing in lakes or the ocean and he caught everything from lake trout to a 63 lb. halibut.  Loren, Trudy and family did a lot of tent camping and trailer camping and traveling over the years.  They liked nothing better than to get in their pickup and pull their trailer all over the country to visit their kids, grandkids and the many friends they had.

Loren and Trudy served 2 missions after they retired – one to Tampico, Mexico (1985-86) and the other to San Antonio, TX (1989-90).  Loren and Trudy relocated to AZ in their later years to be closer to family.  Loren’s beloved wife Trudy passed away June of 2014, just days short of their 58th wedding anniversary.

Loren is survived by 4 daughters and a son, their spouses, 25 grandchildren and 14 great-grandchildren.

This is a poem that was found in Loren’s things:

“Don’t Weep Over Me” Don’t weep over me, nor shed any tears – When my time is up on this Earthly Sphere. My soul has fled through ethereal space. To its eternal home of love and grace. My Friends are all waiting there, To greet me and their Joys to share. By Elder Shaffer Salt Lake City