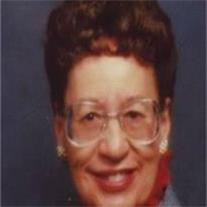 Send Photo of Lola May Smith

Lola May Pearce Smith, 91, of Mesa died Tuesday, April 16, 2013 after a brief illness. She was with her family when she peacefully passed away. Lola May was a lifelong resident of Arizona spending her early years in Northern Arizona where she was born in Taylor. As a young girl she moved with her family to Mesa. She was pre-deceased by her husband Ross as well as a grandson. She is survived by her children: Ronald Smith (Annette) of Idaho, Mark Smith (Kathy) of Mesa, Sandra Howell (Jack) of CA and LouAnn Done (Mark) of Mesa; 9 grandchildren, 10 great-grandchildren and 3 great-great grandchildren; sister Ruby Efros of Phoenix, and brothers Marion Pearce of Mesa and Melvin Pearce of Idaho. Lola May enjoyed gardening, quilting & sewing and was an avid genealogist. Lola May was a lifelong member of the Church of Jesus Christ of Latter-day Saints and belonged to the Westwood ward. Funeral services are scheduled for Tuesday April 23, 2013 10 AM at the Church of Jesus Christ of Latter-day Saints 1054 W. 2nd Place in Mesa. Evening viewing is scheduled for Monday April 22nd from 6-8PM at the Bunker’s Garden Chapel, 33 North Centennial Way, Mesa. Additional viewing is set for one hour prior to her funeral services on Tuesday. Interment will follow the funeral services at the City of Mesa Cemetery where she will be laid to rest next to her husband.