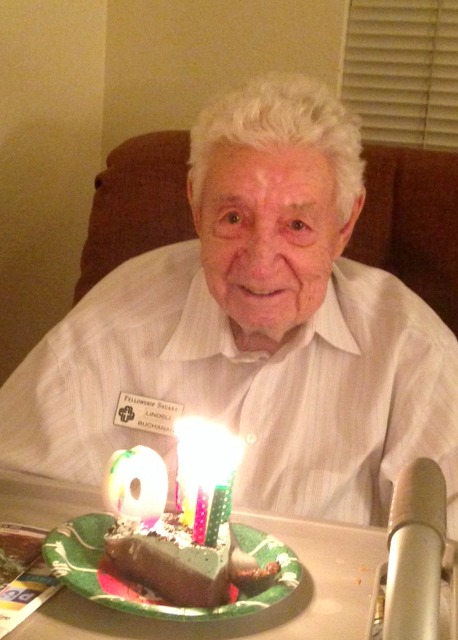 He married Wanda Hawkins in 1940 and had one son, Rickey Buchanan.  Following WW II, after a divorce, he married Dorothy Cary in 1948.  Jackie had three children (David, Meridel and Terrell).  Lindell and Jackie (Dorothy) had the twins, Cary and Cheri, in 1949. He was married to Jackie for 61 years, widowed in 2009.

He joined the US Army at 19 and transferred to the Army Air Corps when it was established.  He was trained as a bombsight mechanic on the highly classified Norden Bomb Sight, and utilized this training during WW II flying B-29 missions in the Pacific.  He was assigned to Adak Island, in the Aleutians, Alaska.  He served in a war zone again during the Korean conflict.

During his career, he was stationed across the US, including tours in CO, WA, and TN, and overseas in Korea, Japan and England. He also had many TDY (temporary duty) assignments in exotic locales like Morroco.  He retired after 30 years in the US Air Force as a CMSGT (Chief Master Sargeant).  He was 49 years old and the year was 1966.  Some of the best adventures were still ahead for Lindy and Jackie.

Lindy and Jackie realized their dream of RVing full time a few years after retiring from the Air Force.  They loved the life living in their Airstream:  traveling to almost every state, attending Airstream rallies, traveling with other Airstreamers on organized caravans, meeting new people, and even exploring parts of Canada and Mexico.   After 25 years as snowbirds, Dad’s deteriorating eyesight forced them to hang up their RV keys in 2005, moving to Fellowship Square in Mesa, AZ.  Lindy’s brother, Keith and his wife, Laverne, had made their home in Mesa, since Keith’s retirement from the Air Force.  Lindy and Jackie had wonderful years there surrounded by their extended family, friends new and old, and frequent visits from family living outside AZ.

After 2009, Lindy lived independently, with only a little assistance, in the apartment he had shared with his wife until his need for more assistance became evident to him.  He decided to move into The Oasis, adjacent to Fellowship Square in February 2017.

Lindy was a skilled handyman, tinkerer, mechanic who enjoyed many activities during retired life, especially woodworking and plastic canvas art and craft.  Even when he was on active duty he enjoyed stimulating activities.  He built a TV at one time, followed directions from “Popular Mechanics” magazine and built a houseboat, built a natural rock patio, and introduced his kids to rural life by converting the 14 acres he bought, to a ‘mini farm’ complete with chickens, pigs, calves, horses and a big garden.

He was a gentle, honest Christian man, who enjoyed the weekly Bible study and the monthly Veteran’s Breakfast Meeting during his 12 years at Fellowship Square.  He really enjoyed listening to Audio Books after he was unable to read because of macular degeneration.  One of his favorite pastimes was watching classic movies.   It was an enjoyment he loved to share with his visiting adult children.   He was a soft-spoken, kind and generous husband, father, grandfather, great and great-great grandfather.