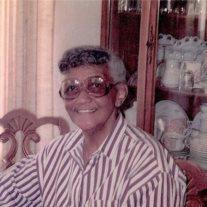 In Loving Memory of Lillie Mae (Kirby) Tidwell. “Lil” was born December 18, 1922 to Percy and Virginia (Adkins) Kirby in Colp, IL. She spent most of her adult life in Chicago, IL, until relocating to Arizona in 2006. She spent the remaining 8 years of her life in Chandler, AZ where she was called home after 91 years on June 16, 2014.

“Lil” was a graduate of Herrin High School. She was employed by the United States Post Office for twenty plus years, and then as a child care representative for Catholic Charities until her retirement.

“Lil” was known for being drawn to infants and those less fortunate than herself. She was blunt and direct at times, witty and comical at other times. She loved her family, home, friends and neighbors. We will miss her deeply. May God rest her soul. Funeral services are Tuesday, June 24, 2014 at 11 AM, preceded by a visitation at 10 AM at the Holy Trinity Community A.M.E. Church, 220 South Chestnut Street, Mesa, AZ 85204. Arrangements by Bunker’s Garden Chapel.