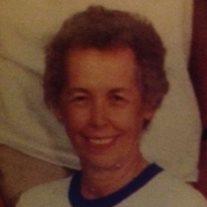 Our dear Mother was taken from our care into the loving arms of her Father in Heaven.

Lillian was born to Frank James Reed and Ida Rebecca Saetre. Raised in Barnes, Wisconsin. She was the youngest of 8 children, her six brothers (Earl, Glenn, Jim, John, Richard, Alan) and 1 sister (Betty) kept close tabs on her and were influential in giving Lillian an appreciation for having fun and a positive outlook on life.

Lillian married in 1951 to John Walcott Adams and is the mother of four children (Donald, Peggy, Kelly and Phillip). After raising her children, Lillian worked as an Activity Assistant at a Senior Community. She was also married to Ken Milroy in her later years.

She enjoyed the many simple pleasures in life…going for walks, playing cards, painting, sewing, Loved dancing and socializing. She also enjoyed working on jigsaw puzzles and just spending time with family. She had a contagious zest for life that afforded her many friendships.

She truly was an angel! We will all miss her dearly!