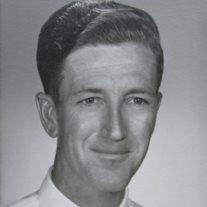 Wahl, Leslie Dean
Dean died January 25, 2014 at the Citadel, Mesa, Arizona. Dean was born on a farm near Gorham, Kansas on August 4, 1924 to Jacob and Anna (Hauschild) Wahl. Dean was the youngest of four brothers before the family was blessed with two sisters.
After his 1942 high school graduation in Hays, he continued to farm while Philip and Alvin served in the Army. After they returned he farmed, picked tomatoes in Colorado for a season and began working at Brownies Gas Station in Gorham Kansas. He met Vona Moss at the gas station in 1949 and they were married in May 1950. They had a wonderful life together in Russell Kansas (1950-1961) and Mesa Arizona from 1961 until Vona’s death in 2002. Dean’s devotion to Vona goes beyond words.
Dean was a natural in the gas station, he related to his customers with an engaging personality and sense of humor they appreciated. He knew how to care for their cars and stood behind his work. He ran the Champlain station in Russell from 1952-1961, and Wahl’s Sunset Service in Mesa from 1961-1976. His stations were more than a business; they were a community of families. Dean kept it all going frequently working non-stop from early in the morning till late at night as the business owner, mechanic, counselor, friend and father to two sons who couldn’t wait to see the doors close for the night. After the station he went to work for U-Haul as a mechanic until he retired in 1992 where he knew his trucks and mentored the younger mechanics.
Dean is survived by his sons Mark (Patrice) Wahl of Madison Wisconsin and Jordan (Lisa) Wahl of Mesa Arizona, two grandsons Christopher (Brooke Godfrey) and Jonathan (Alexandra) Wahl. Also surviving are: two great granddaughters; Chyna and Winnie; his sisters Norma (Wahl) Strecker of Galatia, Kansas, Caroline (Wahl) Peterson of Clifton, Kansas. He was predeceased by his brothers Philip, Earl and Alvin.
Dean was baptized and confirmed in the Lutheran faith. A funeral service will be held on Friday, January 31, 2014 at 2:00 PM at the Victory Lutheran Church, 5946 E. University Drive, Mesa. A private burial in the Heritage Garden Section of the Mesa Cemetery will follow. Those considering an expression of sympathy are asked to consider Victory Lutheran Church or the charity of the donor’s choice.
The family would like to express their appreciation to the staff of Citadel and the staff of Sun Valley Hospice for their loving care and compassion.