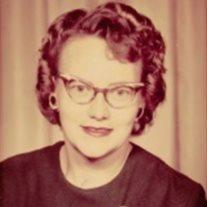 Leona Margaret Sabrowsky, age of 78 years and 9 months, passed from this life into life eternal on Monday, January 27, 2014, as a resident at Arbor Rose Senior Care Assisted Living Facility of Mesa, AZ. Leona was born April 14, 1935 to Elmer Ludwig Brookehardt Sabrowsky and Ida Magadlene (Hamann) Sabrowsky in the rural community of Farming Township, (Albany) of Stearns County, MN. Leona was baptized into the Christian faith and confirmed in that faith at Immanuel Lutheran Church of Farming Township. She was later united in marriage to Aaron Friederich Sabrowsky of Albany, on June 5, 1954. Leona and Aaron farmed for two years before moving to southern California to raise their family. In 1985, she retired with her husband, Aaron, to Days Creek, Oregon; residing in the area until they moved to Mesa, AZ in 2007. Leona was a lifetime active member of the Lutheran church and avid supporter of their Lutheran schools. While her health allowed, she served faithfully, singing in the choir, and in women’s committees.
Leona will be dearly remembered as a loving, devoted, wife & homemaker, mother, grandmother, and daycare provider for many families over the years. She was happiest with her family members around her, but also enjoyed, and was gifted in using her hands on all kinds of crafts; especially sewing for her children, grandchildren, and home, crochet projects, and building and creating dollhouses, and furniture. She loved all things related to God’s creation; especially birds, butterflies, and flowers. Illustrations of these, as well as her own drawings graced her scrapbooks and collections of poetry. Over the years she graced the lives of her loved ones with her beautiful voice in song, and was honored by being chosen to sing many soprano solos throughout her grade school years, and well into adulthood.
Leona is survived by her husband Aaron F. Sabrowsky; five children, Carolyn (John) Baumann of Cannon Falls, MN; Dwight (Lori) Sabrowsky of Redondo Beach, CA; Ronald (Sharon) Sabrowsky of Sedro-Woolley, WA; Dale (Evelyn) Sabrowsky of Buena Park, CA; and Glenn (Jeanette) Sabrowsky of Mesa, AZ. Grandchildren: LeeAndra (David) Dodge, Melissa (Wayne) Birling, and Daniel Baumann / Rachel (Matthew) Meyer, Samantha and Amanda Sabrowsky / Angela (Matthew) Lopez, Alisha Sabrowsky and Russel (Elizabeth) Sabrowsky / Aaron Alexander, Sonia and Zoe Sabrowsky. Great Grandchildren: Riley and Ella Dodge, and Fiona Sabrowsky. Siblings: Milford (Eleanore) Sabrowsky, Mervile (Ceceilia) Sabrowsky, Willard (Donna) Sabrowsky…sisters-in-law Grace Sabrowsky, Adeline Sabrowsky, Adeline Rohe, and brother in-law Raymond (Erna) Sabrowsky. Many nephews and nieces, and extended family.
She was preceded in death by her parents; her Father and Mother in-law, Friederich, and Mabel Sabrowsky and husband’s siblings and spouses. Brother-in-law Alfred Sabrowsky, Arthur & Esther Schlueter, Arthur Sabrowsky, Clarence and Eleanore Silbernick, Edward & Hildegard Shadbolt, and Arthur Rohe, and several nieces and nephews. A Visitation will be held at 9:45 AM, Tuesday, February 4, 2014 with a Service to follow at 10:30 AM at Pilgrim Luthern Church, 3257 E. University Dr. in Mesa. All monetary love gifts will be donated to Pilgrim Lutheran School, Mesa, AZ.