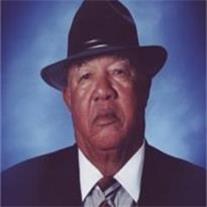 Leon McClelland was born April 9, 1932 in Annona, Texas to Charlie and Onnie (Wooten) McClelland. He attended school in Paris, Texas and graduated from B.J. Graves High School. After high school he was drafted in to the US Army in 1952 and served in the Korean War. After leaving the army he moved to Mesa, Arizona in 1955.

Leon worked as a civil servant at Williams Field Air Fore Base where he was honored for his faithful, dependable service. He always had a second job because he was a hard worker. While working at the base he also worked for the City of Mesa at the Washington Activity Center for many years. After 30 years of service, he retired from the base, but continued working at the Washington Activity Center. He was known by the whole community. He also worked at Arizona State University as a student parking lot attendant.

He belonged to the NCAACP where he served as the treasurer in the Mesa chapter for many years. He attended numerous city council meetings, making his voice heard on important issues. If anyone had any issued in the community they knew they could come to him and he would help in any way he could. He helped many home owners in the Washington neighborhood participate in the city house program, receiving new houses built in exchange for their old homes. He worked tirelessly serving his community. He was an active member of the Helping Hands Club for many years also.

Leon’s past time was the loved playing dominoes with his friends. One of his favorite sayings when he was playing was “Crissie Mae or Christine aware big feet and bad hair