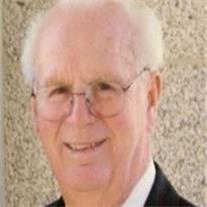 Lawrence Hiatt Packard, 89, beloved husband, father, grandfather and great-grandfather passed away April 16, 2013 after a very brief and brutal battle with metastatic melanoma. He was born July 7, 1923 in Nampa, Idaho to Owen Earl and Clara May Hiatt Packard. Larry grew up in a loving home under conditions of depression-era hardship. After high school, he entered the Army Air Corps during WWII, serving as a gunner on many missions over Italy and Austria. Later he served as a missionary for the Church of Jesus Christ of Latter-day Saints to his beloved Polynesian people in Tahiti. His life-long love of everything Tahitian suffused his heart, home and family life. After his mission, Larry joined his family who had moved to Mesa, Arizona where he met and married the fun-loving and compassionate Martha Kerby in 1950. They raised a busy and happy household of seven children while Larry received his education at ASU and taught history and government for 31 years, mainly at Mesa High School. Larry also received his general contractor’s license and founded Empire Construction, building many homes in the City of Mesa. After retirement in 1983, Larry and Martha served two additional missions in Tahiti. He also became a master woodworker, following in his father’s footsteps, delighting his family with beautifully crafted gifts and treasures. He dearly loved his many years of service as a sealer in the Tahiti and Mesa Temples. Larry is survived by his devoted and loving second wife and high school sweetheart, LaRue Yorgason McKnight Packard, who returned him to great happiness after Martha’s death in 2009, his children Robert (Christine), Stephen, Marla (Gary) Blum, Judy (Roger) Ethington, Sheila (John) Whitney, Penni (Arn) Stonebrink, and Cindy (Vern) Brown, 36 grandchildren and 23 great-grandchildren, stepchildren Terry (deceased) and Debra McKnight, Linda (Doug) Henry, Randy McKnight, and Bart (Alane) McKnight and their families, as well as loving nephews and nieces, in-laws and other relatives and friends. He is further survived by his sisters, Elaine Packard Cox and Lowene Packard Saxton. He is preceded in death by his dear wife of 59 years, Martha, one grandson, and his siblings, Arthur and Jeanne Packard Nielsen. Services will be held at the LDS Solomon Ward Building on Saturday, April 20, at 1 p.m. with visitation on Friday, April 19 from 6-8 p.m. and one hour prior to the funeral on Saturday. Sincere thanks to Drs. Hugo Fazz, Ramsey Umar, Grace Hospice, Celeste Luna and Bonnie Morgan. In lieu of flowers, donations to the LDS General Missionary or Perpetual Education Fund are suggested. Arrangements by Bunker’s Garden Chapel.