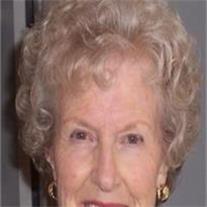 LaVerde Johnson Gunter rejoined her Father in Heaven on April 15, 2012. She was born in Blanding, Utah on March 18, 1920. At the age of 13 she moved to Virden, NM, and then to Duncan, AZ 4 years later. In 1946 she moved to the Valley of the Sun where she lived the remainder of her life. She worked as an officer of the ASU police department for 17 years before retiring. LaVerde was predeceased by 3 husbands, 4 siblings and her oldest daughter, Helen Ruth Johnson Abbott. She is survived by daughters Ruby Kay Johnson Erickson, Shirley Ann Capps Johnson and son, Larry Wayne Capps, 9 grandchildren, 25 great-grandchildren and one great-great-grandchild. Viewing will be held at Noon and services 1 PM, Thursday, April 19, 2012 at the LDS chapel in Tempe located at College Ave. & Alameda. Burial will be with predeceased family members in Virden, NM. Arrangements by Bunker’s Garden Chapel.