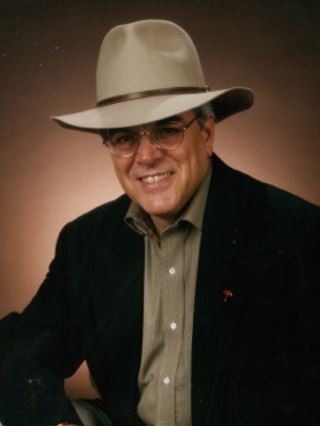 Larry was born to Lattney and Elizabeth “Betty” Upton on December 13, 1940 in Morgantown, Kentucky. He spent his childhood in Bowling Green, Kentucky and Pima, Arizona. He graduated from Pima High School in 1959, attended Eastern Arizona College, graduated with a degree in Business Administration from the University of Phoenix in 1980 and the American Bankers Association National Commercial Lending School at the University of Oklahoma in 1985 where he was elected class president and received honors.

Larry was a man of many talents and interests. In addition to spending a career in banking at Valley National Bank, First Interstate Bank, and Chase Bank, he was also an financial advisor for Primerica and an amateur dirt-track stock car racer (http://www.uptonracing.com). But, an accomplished storyteller, his favored passions were history and literature. He was an amateur historian (“Who Robbed Major Wham? Facts and Folklore behind Arizona’s Great Paymaster Robbery” with Larry T. Ball, which appeared in The Journal of Arizona History, which was awarded the Arizona Historical Society’s “Journal Article of the Year,” Bowling Green Stock Car Racing, The Historic Manzanita Speedway in Phoenix, Memory is a Wonderful Thing, Perspective: One Family’s Journey Across America), and an author who expressed himself in several genres (http://larrythurmanupton.com): drama (Great Trial of the Wham Robbers), memoir (A Bowling Green Boy), and fiction (The Cocopah Murders and Sugar Doll). His most fervent wish was for “ordinary” people to record their stories, thoughts, and personal narratives.

A life-long learner himself, Larry was an enthusiastic advocate for education, funding/supporting scholarships and endowments for community colleges in Arizona. He saw education as a vital tool to understand the world and oneself and to contribute to one’s family and society.

He loved to spend time and travel with Judy, the love of his life, visiting many states and Europe. He also enjoyed spending time at their second home or “retreat” in Show Low, Arizona, visited often by friends and family.