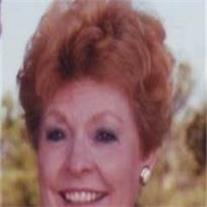 LaRee Maloy Allen, a resident of Pinetop, AZ since 1986 passed away September l2, 2012 in Mesa, AZ. She was born September 16, 1936 in Safford, AZ to Lawrence Lorenzo Maloy and Orlena Nancy Frazier. She was one of five children. LaRee married Philip Kerry Allen in Safford on July 16, 1954. Their marriage was solemnized in the LDS Salt Lake Temple 10 months later. She is survived by their four children Kerri Sue Allen Kleiner (John), Wyatt Maloy Allen (Stacy), Michael Philip Allen, Sr. (Paula), and Brittan Hugh Allen (Leah), 19 grandchildren and 18 great-grandchildren. She is also survived by 2 brothers, Elwood Maloy (Colleen), Larry Maloy and 2 sisters, Dracia Lee and Lynneah Maloy Francom (Paul). She was preceded in death by her parents and a sister, Claire John. LaRee served faithfully in many positions in The Church of Jesus Christ of Latter-day Saints, including Relief Society President, Young Women’s President and many positions of responsibility over her life time. She served with her husband on two full-time missions for the Church. LaRee was active and well-loved wherever they lived and became proficient in cake decorating for weddings and floral design. She was adored by her husband, Kerry. LaRee brought sunshine into the lives of all she met. The viewing will be Saturday, September 22, 2012 at 10 AM and the service will be at 11AM at the Pinetop Lakes Ward, 4075 Buck Springs Road, Pinetop, AZ 85935. Interment will be at the Mesa City Cemetery, l2l2 N. Center St. Mesa, AZ at 5 PM the same day. Arrangements by Bunker’s Garden Chapel.