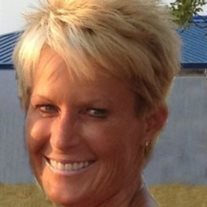 Kimberly K. Lawrence, 52, passed away August 4, 2014 in Phoenix, AZ. Kim’s life began August 15th, 1961 in Des Moines, Iowa, where she attended Ankeny High School and continued her education at The University of Iowa obtaining a B.S. degree. She eventually completed her Master’s in Speech Pathology at California State University, Long Beach. Kim became a resident of California after receiving her Master’s and lived in Seal Beach enjoying the southern California life style while working at Long Beach Memorial Hospital. In 1989, she relocated to Arizona to be close to her sister Robin, and was eventually married to her husband Bob of 20 years. She then started a 10-year career in social work and made a career change in 2000 to pharmaceutical sales. Her drive, high energy and obvious competency were ultimately recognized and she was most recently promoted to a Division Manager at Forrest Labs. Kim loved to experience new things and was a bit of a thrill seeker. She even went skydiving in Eloy, AZ. She was an avid runner and loved all sports, especially her Hawkeyes. She was also a tireless animal lover. She strived to be the best at any chosen endeavor and expected nothing less of those people around her. Some people would say she was a little spirited or competitive – she was. Some would say she was caring and extremely compassionate – she was. She loved those around her intensely. For those that were in her inner circle, there were no boundaries to that love. She loved her family and friends and they loved her. Her father, Dale Shaw, preceded Kim in death. She will be celebrated and sadly missed by her husband, Bob and dog Oliver, mother Sandy and step-father Jay Strosnider of Ankeny, IA, grandmother Lavonne Johnson, brother Todd and sister-in-law Lisa, nephews Ryan and Nicholas all of Ankeny, IA, sister Robin and brother-in-law Craig Hagen, niece Jordan and nephew Brody all of Gilbert, AZ, as well as many other friends. Gods speed to you Kim as you continue your journey in Heaven. We look forward to the day we are all reunited. There will be a reception celebrating Kim’s life on Aug. 16th, from 7-11 PM in Ankeny at Geisler Farms, 5251 NE 94th Ave., Bondurant, IA 50035. See Facebook page “Kim Lawrence’s Celebration of Life.