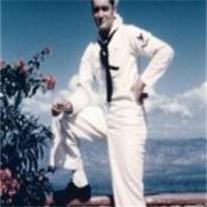 Kim Fenton Harris, 79, passed away peacefully in Gilbert, Arizona, on June 27, 2012. He was born September 6, 1932, in Linden, Arizona. As a young man, Kim enlisted in the United States Navy and proudly served his country for four years. He later graduated from ASU with an MA in Education and spent the next 30 years teaching in the Tempe, Arizona’s school system. After retiring, he did many service activities for The Church of Jesus Christ of Latter-day Saints. He served in the church’s Employment Center and in the Family History Center in Mesa, Arizona. Kim and his wife Norma also served two foreign missions for the church. Their first mission was in Vientiane, Lao PDR, teaching English to the professors in the School of Architecture and Building and at the Medical Health School working with doctors and medical staff. Their second mission took them to Izmir, Turkey, performing humanitarian service to the Turkish people. In both missions he became known for his good humor, willingness to help others and desire to promote good will. Kim also had the opportunity to teach language arts in Jeddah, Saudi Arabia. It was challenging, but he enjoyed the experience of working in the Dar el Fiker school for boys.