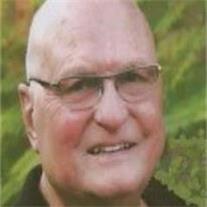 Kenneth Edward Stone of Mesa went home to be with his Lord and Savior on October 12, 2013 after a valiant fight against brain cancer. Ken was born in Orangeburg, S.C. on June 8th, 1941 to the late Edward Stone and Montine Turner. Ken served his Country by enlisting in the United States Navy at the age of 17. He later moved to Mesa and joined the Mesa Police Dept. where after 22 years he retired as the Assistant Chief. He went on to work for both Mesa and Gilbert Public Schools. Ken had many academic achievements including attending the FBI Academy in Quantico, Virginia; received a degree from Mesa Community College, and was a certified bomb technician, just to name a few. He was a member of the Fraternal Order of Police Lodge #9 and an active member of Real Life Christian Church in Gilbert. Fishing was a big part of his life; he enjoyed wood working as well as gardening. He is preceded in death by his brothers: James Stone, Michael Stone, Steven Stone; and sister: Susan Stone. Survived by his wife Sheryl of 46 years; four children: Katherine Rowse (Paul), Marshall Stone, Kenna Stone (Cort), and Tamera Stone; Eleven grandchildren: Nicole Herd (Kevin), Kyle Fic (Alyse), Michael Stone, Shannon Stone, Jake Stone, Tyler Carr, Zachariah Carr, Nikolaus Stone, Blake Weaver, Doodle Weaver and Dillion Davis. Four Great grandchildren: Tyler, Drew, Rayven, and Marley. Sister: Carol Gay of Charleston, S.C. Ken was also thought of as dad, grandfather and uncle to many. Ken was truly a loyal friend and neighbor. A celebration of Ken’s life will be held at the Mesa Police Training Facility, 3260 N. 40th St., (Greenfield and the 202), Mesa, AZ at 10:00 AM, Saturday, October 19, 2013. In lieu of flowers please make a donation to the American Cancer Society.