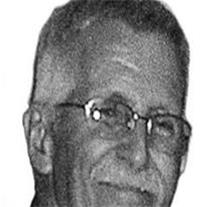 Kenneth E. Rozinska, 77 of Apache Jct., AZ died Aug. 1, 2009 at Trillium Hospital in Mesa, AZ. He was born Jan. 29, 1932 in Grand Rapids, MI to Kenneth F. and Alma (Morehouse) Rozinska, and was the second of three children. He joined the Army in 1950, served in the Korean War, stationed at Fort Carson, CO. He married Cora Sandoval on Aug. 1, 1953; eventually settling in Salida, CO. They have three children.

Kenneth worked at Climax as a welder and moved to Apache Jct., AZ in 1970. He was a very talented man who could do any kind of work. He enjoyed spending time with his family and always made sure they were taken care of. He loved to attend golf tournaments, car races and baseball games. Kenneth liked and was well liked by everyone. He will be greatly missed. He was preceded in death by his parents Ken and Alma Rozinska and one sister, Marge Collins. Survivors include wife, Cora; children, Robert Rozinska, Keitha Rozinska and Denise (Lewis) Bailey; Sister, Valda McLucas; grandchildren, Kandi (Kenneth) Nelson, Kenneth J. Rozinska, Christopher Harty, Nicole Bailey and Ryan Bailey; great-grandchildren, Kyle Nelson and Ayla Bailey; several nieces and nephews and very special nephew Melvin Valdez. The rosary will be held at 9:30 a.m. followed by a memorial service at 10:00 a.m. Aug. 14, 2009 at St. George’s Catholic Church, 300 E. 16th Ave., Apache Jct., AZ, Following the service his ashes will be interred with military honors at the National Memorial Cemetery of Arizona.