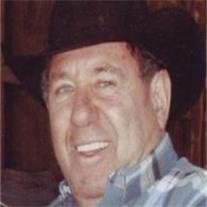 He worked hard and played hard and lived life to the fullest. He worked in construction as a heavy equipment operator, project manager of roadways, bridges, and as an estimator for the last 15 years.

He Loved the out-of-doors. In his early years he hunted deer with his folks, later quail and dove with a dog named Max, his companion during those times. He loved playing sports such as all church basketball, softball and golf, but tennis was his real love and played until a month before his death. In the 70’s he and his father played in the Australian Tennis Open, also during the 70’s he owned Whitelocks Sporting Goods in North/East Phoenix.

He owned a restaurant in Pinetop, AZ with his wife Wanda.

We loved him for his generosity in helping his children and giving extravagant gifts, he liked people and was a loyal friend, but his sense of fun came from his mother the late Vernece Love Haumont.

He was a life long member of The Church of Jesus Christ of Latter-day Saints (the Mormons) and was a faithful home teacher; his families loved his well thought out messages.