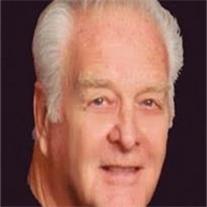 Kenneth Charles Walters of Chandler, Arizona, beloved husband, father, grandfather and friend passed away March 27, 2012 at age 77 after a valiant battle with diabetes. He enjoyed camping, hunting and fishing. Born August 15, 1934 in Magna Utah, he was the last surviving child of Alfred B Walters & Hazel Kate Steadman. He married his sweetheart of 56 years Betty Jean Schwinn in 1955. He is survived by his wife, and children, Scott Walters (Susan), Traci Layton (Ken), and granddaughters, Brooke, Sydney, & Whitney. He was preceded in death by son Randy Walters. Funeral services are Monday April 2, 2012 at 11am, Pleasant Ward Chapel, 800 W. Chandler Heights Rd, Chandler AZ. Visitation 1 hour prior at 10am. Arrangements by Bunker’s Garden Chapel in Arizona. In Utah, friends & family are invited to gather on April 4th from 9:45am to 10:45am at Lindquist Mortuary, 2140 Wash. Blvd. Ogden UT. Graveside Service & Interment to follow at 11am at Ben Lomond Cemetery in No. Ogden. Flowers may be sent to either mortuary.