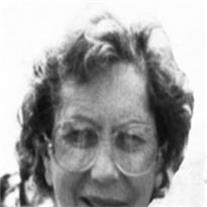 June Elizabeth Williams Coyle Beck was born in Phoenix, Arizona on November 10, 1921. Her parents were Elizabeth Crouch and Archie Andrew Williams, who owned a farm outside of Chandler. June was the first of four children, including A.C. Williams of Prescott, Gerald Williams (deceased), and Billie Jo Stricker of Colorado Springs. She was baptized in the Church of Christ. June married Johnnie E. Coyle in 1937. Together they farmed, raised cattle and owned a grocery store in Chandler. During their 37 years together they had two daughters Carolyn Verweyst and Gayle M. Fox. Their grandchildren include Andrew, Leslie and Brianna Fox. Besides raising two wonderful girls June had a variety of jobs during her life. She worked the farm alongside her siblings; weighing cotton and providing “sodies