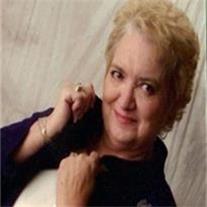 Judy Sherene Russell age 66 passed from this earthly life Friday, April 1, 2011 in Mesa, AZ. She was born April 1st 1945 Montrose CO. She was known to her family as Judy and

to most of her friends and co workers as Sherene. Judy was preceded in death by her

She leaves behind her father George Myler of Mesa, two sons, Robert (Vicki)

Leonard of Japan, two sisters, Janet (Bruce) Bosley and Jeannie (Ray) Engel of Pennsylvania; also 11 Nephews, 7 nieces, 23 great-nephews, 9 great-nieces, and one great-great nephew, who will all miss her greatly, especially the Hippo song! Due to her illness she left PCS as and Administrative Assistant several years ago. Judy loved crocheting, hand crafts, playing UNO with her family, loving on the little kids,

spending time with her friends and “OH YES