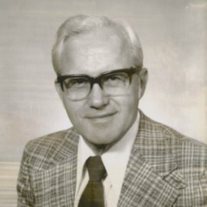 Joseph R. Tomasic, 98, a 36 year resident of Mesa passed away on Sunday, August 10, 2014 of natural causes; he was surrounded by his family at death. He was born in Lorain, Ohio on July 8, 1916. Joe was a steel worker, spending 42 years in the employee of the U.S. Steel Corp. national tube division. Retiring as a plant general foreman.
Joe spent one year in the CCC camps during the depression and graduated from Lorain High School in 1936. He was an avid sportsman and played hockey and softball as well as soccer for many years. In 1978 he and his wife Beverly moved to the valley where they were very active in both round and square dance groups. In 1999 he was named volunteer of the month for his work in tax preparation with the AARP.
Survivors include: Robert (Carol) Tomasic of Waterville; OH, Jeanne (Donal) Lambdin of Amherst, OH; Jack of Mesa, AZ; and Joe (Kathy) of Gilbert, AZ. Stepsons: Robert (Joyce) Bainbridge of Elyria, OH; and Jon (Gail) Bainbridge of Loraine, OH. Joe had 8 grandchildren and 15 great grandchildren. Also surviving are a brother: Jim and sister: Mary Skolnicki in OH.
He was preceded in death by his wife Beverly in 1999. 1st wife: Jennie in 1972. His parents: Blaz (1935) and Kata (Mihalic) 1985, brother’s: Steve, Martin, Mike, William, Robert, Paul and sister Annie.

A private memorial service was held at Bunker’s University Chapel in Mesa, Arizona