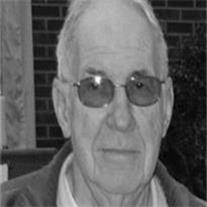 Joseph Lawrence LeQuia went to eternal rest on Wednesday, February 17, 2010, after an extended stay at Banner Heart Hospital in Mesa. He was born July 6, 1929 at St. Francis Hospital in Escanaba, MI to Joseph N. and Rose A. (Pepin) LeQuia. Joseph and Helen were residents of Niagara, WI and are current residents of Good Life Resort in Mesa for 20 years. They were married on August 9, 1948. He is survived by his wife Helen, six children Michael LeQuia, James (Cindy) LeQuia, Susan Johnson, Carol (Dan) St. Arnauld, Richard (Tammy) LeQuia, and Joseph (Emily) LeQuia. He has 17 grandchildren and 18 great-grandchildren. He was preceded in death by his parents, brothers Richard, Ken, Paul, and Francis. He is survived by his sisters Theresa, and Rosemary and his brother Bob. He worked many years for Red Owl Corporation, then built his own store LeQuia’s Foodland in Niagara, WI. Coming from outside of Niagara, he really enjoyed meeting, working with and becoming a part of the community. After selling the store he went to work for Culligan Water and then to D & L Plumbing in Iron Mountain, MI. He was a devoted family man and enjoyed playing pool and horseshoes. He was nicknamed “Joe Fix It