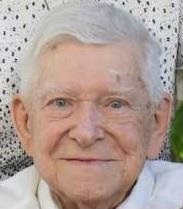 Joseph George Rickwalder, 95, of Mesa Arizona passed away peacefully on Wednesday, January 3, 2018.  Known to friends and family as “Ricky” he led a very happy, active life filled with family, friends, laughter and love.  He served oversea in the Army/Air Corp during WWII and was later stationed in Washington D.C., where he had the distinct honor to serve as a guard at the Tomb of the Un-Known Soldier, for which he was very proud.  After serving his country he married his true love Theresa in 1945 and they were blessed to share 72 wonderful years together.  Joseph worked for Western Electric, which later became part of the Bell Telephone system, retiring in 1980.  At that time he and Theresa relocated to Arizona where he was able to pursue his passion for golf year round.  His friends and family describe him as a wonderful compassionate man, a fantastic father to his beloved children who loved life and always had a twinkle in his eye.  His quick wit and great sense of humor, along with his tenacity and strength will be remembered by all.

Mass of Christian Burial will be held at 10:00 am on Thursday, January 11, 2018 at All Saints Catholic Church, 1534 N. Recker Road  in Mesa Az.  Interment will take place at 11:30 am at Queen of Heaven Cemetery, 1562 E. Baseline Road, Mesa, Arizona.  In honoring his great love of children, In lieu of flowers donations to St. Jude Children Research Hospital, 501 St. Jude Place, Memphis, Tennessee would be greatly appreciated.