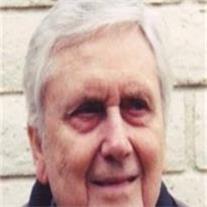 Joseph Arthur Carey, 85, of Mesa, AZ passed away October 23, 2009. He was a loving son, husband, brother, father, grandfather and great-grandfather. He was born January 24, 1924 to Arthur Elias and Mary Ruth Arburn Carey in Indianapolis, IN. He served his country with honor as a medic in the 75th Infantry Division in World War II and fought in the Battle of the Bulge. Joseph was preceded in death by his parents and two sisters. He is survived by his wife Jeanene; sister Patricia Aikin; mother-in-law Alice Gower (to whom he was very kind and caring); daughters Elizabeth (Keith) Essig and Priscilla (James) Bilas; step-children Lisa (David) Empey, Mitzi (Marc Oxborrow) Melville and Jason (Sindee) Melville. He was extremely proud of his 11 grandchildren and 2 great-grandchildren. Joseph was a long time member of The Church of Jesus Christ of Latter-day Saints. Interment will be Friday, October 30, 2009 at 1:30 PM at the National Memorial Cemetery of Arizona. In lieu of flowers please send donations to Hospice of the Valley or the Missionary Fund of the LDS Church.