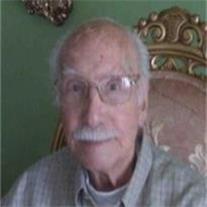 Joseph A. Bellino, formerly of Youngstown, Ohio died in Scottsdale, AZ on May 5, 2011 at the age of 104. He was born near Foggia, Italy on October 28, 1906 and emigrated to Youngstown with his family when he was 6 years old.

He worked as a machinist at Republic Steel. After retirement he moved to Tucson, AZ still spending summers in Youngstown. He eventually moved permanently to Arizona. He enjoyed traveling and delighted in having traveled to his birthplace in Italy with family members.

He enjoyed weekend garage sales, bartering as a mental sport. He had a keen intellect and wit and enjoyed teasing his family right up until the end.

Preceded in death by his wife of 65 years, Carmella Rita (Cook) and son, Joseph Jr,, Mr. Bellino leaves behind his two daughters, Marie V. Peduzzi of Scottsdale, AZ, Rosalie Galla Nichols and husband, Bruce Nichols of Mesa, AZ and daughter-in-law, Elissa Bellino Pascarella of Las Vegas, NV. He was proud to be the patriarch of 6 generations in his family, with offspring scattered from New York to California.

He lived at home until April 2011, when he was briefly hospitalized. He died peacefully at home surrounded by family members. He is loved and will be missed by all.