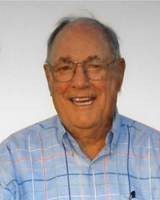 John N. Swanson passed away in Casa Grande, AZ on September 28, 2016 as a direct result of prostate cancer.  He was born in Wichita, KS on January 24,1933 to Harold E and Helen G. Swanson. He graduated from East High in 1950 and was a proud member of the State Championship Track and Cross Country teams.  After earning a degree in Mechanical Engineering from Wichita State University, he completed his formal education 20 years later with a Master’s Degree in Business from California Lutheran University.

In July, 1958, John married Joan M. Lauer of Akron, Ohio and from this union came three fabulous children, Jeffrey J., Laura, and Randall. Following Joan’s death from cancer in 1968, he married Janan O’Keefe Sabag and became an instant father to her equally fabulous children, Patricia, Richard, and Cheryl.  John often said that our family set the global standard for what a blended family should be.

Following John’s retirement in 1993 from the Pacific Missile Test Center at Point Mugu, John and Jana spent the next 20 years travelling the country in their RV and thoroughly enjoyed the RV lifestyle. Along the way, they were active in the Escapees RV Club and have many RV friends scattered around this beautiful country.  Unfortunately, their travels were cut short by Jana’s cancer related death in 2014.  In 2015, John married Donna J. Clifton, a long-time RV friend, and they continued RV traveling until John’s health deteriorated.

At John’s request, no services will be held. A private Celebration of Life may be held at a later date.  In lieu of flowers, John requested that you take an old friend out to lunch or make a donation to a non-religious charity of your choice.