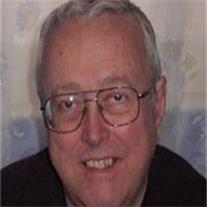 John Frederick Williams, 72 of Mesa, AZ formerly of Wellsburg, WV passed away on August 27, 2011 at his home in Mesa, AZ. John was born on January 20, 1939 in Wellsburg, WV, a son of the late John Henry Williams and Wanda Heatherington Williams. He is preceded in death by his Beloved wife Shirley Jean Williams, who preceded him by three days. Theirs was and is a love that could not be separated, even in death.

John graduated from Wellsburg High School and attended college through the United States Air Force. He was a member of the Lions Club in Wellsburg, WV and was also on the City of Wellsburg’s City Planning Committee. John was a member of the Church of Jesus Christ of Latter-day Saints and loved serving the Lord. He served his country in the United States Air Force as an Air Traffic Controller. He is a Vietnam Veteran who served his country for over 20 yrs.

John is survived in death by his sister Suzie Knezovich of Brilliant, OH. He is also survived by his seven children: John, Don, Woody, Stephanie, Jennifer, Patricia and Stephen, as well as 17 grandchildren, 2 great-grandchildren and many, many extended family members.

Flowers may be sent to Bunker’s Garden Chapel, 33 Centennial Way in Mesa, AZ. Condolence cards and donations can be sent to 1249 S Almar Circle, Mesa, Az 85204. The donations will go to the Missionary Fund of the Church of Jesus Christ of Latter-day Saints.