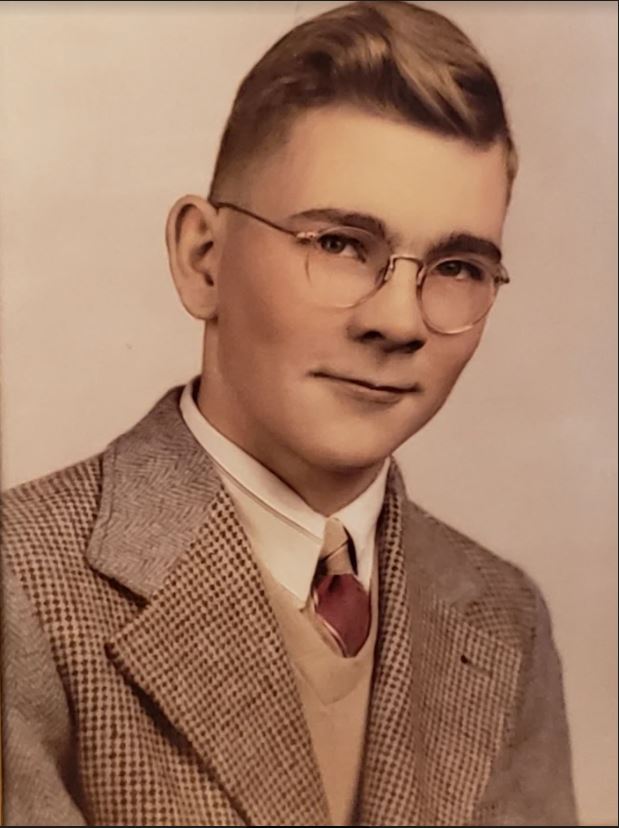 John Edward “Ed” Boyles passed away on Friday, January 15, 2021 at the age of 91 in his home in Mesa, Arizona.  He was born on October 21, 1929 to Lawrence Fax and Mary Boyles in Ann More, West Virginia.  Where he grew up with his Brother Robert Boyles and sister Barbara Crawford.

He met his wife, Carol Lee Boyles, at a New Year’s Eve Party in 1955.  The two wed in Akron, Ohio on August 27, 1956.  They moved to Washington State for a brief period of time, where Ed worked at what he loved….Flying.  Ultimately the two settled in Arizona, moving to Safford in 1957.  There they bought a house and had three children.  Mark Boyles was born February of 1958, Kathy Hunter was born November of 1959, and Mary Jayne Schafer was born October of 1962.  They bought land in Mesa, AZ in 1975 and he helped to build their custom-made home there.

John went by Ed or Eddie his entire life.  His first granddaughter began calling him “Popeye” at an early age, the name stuck, and he was known by his family as Popeye for the rest of his life.  His father thought he was mentally slow, until he was taken to the optometrist, where his first pair of glasses changed his world.  He knew by age 8 that he wanted to be a pilot, and by his early teens was working at an airport, polishing aluminum planes, which was extremely hard work.  He moved out West to get his Aircraft Mechanics License, and then to Long Beach California, where he worked at the Douglas Aircraft Company.  He was very thin, so he was assigned to work inside the wings bucking rivets, which he hated, so he pursued his Pilot’s License.

Once he had his Pilot’s License, he started out towing Gliders and Crop Dusting.  Once, while crop dusting, he was dusted with crop dusting chemicals and pronounced dead.  He woke up to find himself in a body bag.

He and his wife Carol moved to Safford, Arizona and started working firefighting in bombers.  After Safford, he moved to Washington State where he learned to fly helicopters.  The family stayed for 3 years in Washington.  He eventually moved his family to Mesa, Arizona in 1966 and started working for Aviation Specialties where he flew fires, worked lift jobs, lifted supplies to the Havasupai Indians living in Canyon De Chelly and sprayed for locusts in Mali Africa.  He loved to fly B26s as they were fast, and he could fly alone.  Ed was an exceptional pilot and during one instance, he was being interviewed and a component on the airplane failed, and the airplane shook so bad on landing that it broke all the glass in the instrument panel.  At the end, Ed, chewing his Chiclets, looked at the reporter and grinned at him.  Another equipment malfunction ended up in the movie, Tora, Tora, Tora.  Flying the B-17 Bomber into Hawaii to be used as background, a landing gear wouldn’t drop and he was forced to make a belly landing.  This was all caught on film as the movie producers were going to use the footage in the film and this “accidental” footage was kept in the movie and became one of the more memorable scenes in the move.  Ed also provided stand in work with His Sikorsky S-58 Helicopter for Actor Ernest Borgnine for the Television Show Airwolf.  He was still a member of the Actor’s Guild at his passing.

Ed has flown everything from a fabric covered biplane to large 4 engine bombers and helicopters.  At one point he decided to get his Sea Plane License, just because he wanted it.  He was rated in so many airplanes, that he had to have two pilot’s licenses.  He may be the only man who can claim an accident between a helicopter and a train.

Ed lifted all the air conditioners onto Fiesta Mall, and landed his helicopter at his granddaughter, Autumn’s preschool for transportation day and delivered Santa Clause to Pioneer Park and Tower Plaza in his Helicopter.  Ed was a big influence in many young men’s lives when they wanted to be pilots.

Ed Boyles was a very down to earth man, who never needed all the fancy things in life.  His motto was, if it isn’t broke, don’t fix it.  He taught his children, grandchildren and great grandchildren to be respectful, and hard working.  He worked hard to make sure his family never wanted for anything.  He taught us that we could be whatever we wanted to be and he would tell us he would be proud of us even if we were ditch diggers, as long as we were the best ditch diggers we could be.

He is proceeded in death by his wife of 64 years, Carol Boyles (nee Smith), his parents, his brother Robert and Sister-in-law Michealina, his brother-in-law Lewis and Grandson Ryan Schafer.  He leaves behind his children Mark Boyles, Kathy Hunter, and Mary Jayne Schafer (Rick).  His grandchildren include Sabrina Baker (Brandon), Autumn Sobol (Mark), Thomas Boyles and Stephanie Boyles (Jan).  His great grandchildren include Auston, Kaley and Ariana Baker, and Jillian and Ryleigh Sobol.  His laughter, caring and even stubbornness will be greatly missed by all that knew and loved him.

A memorial service will be held on Friday January 22, 2021 at 11:00 a.m. at the Bunker Family University Chapel and he will be laid to rest at the National Memorial Cemetery of Arizona.  Due to the Covid-19 pandemic there are cemetery restrictions, and no graveside service will occur.  In lieu of flowers, the family prefers tribute donations to the Hospice of the Valley (https://www.hov.org/donate/donate-now/)