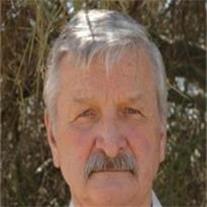 JOHN C. BELLOWS, 63, of Mesa, AZ, passed away peacefully with his family at his side, Sunday, March 20, 2011, at Banner Baywood. As the hub of his family he will dwell in our hearts and memories forever. John was born October 7, 1947 in Dearborn, MI. In the 1950’s the Bellows family moved to Mesa, AZ where John graduated Westwood High School in 1966. He then served with the US Marine Corps, including time spent in Vietnam, resulting in numerous service medals. After his honorable service with the Marines, he began his career as an electrical lineman. It was during his first line job, in 1971, he met and married his true love Charlotte Waterman. John was a 40-year member of Local 769 IBEW in Phoenix. He graduated from the Southwestern Line Constructors JATC as a B.A.T. Certified Journeyman Lineman in 1978, and has spent his career as an apprentice lineman, lineman, foreman, and general foreman. From 1984 to 1999 he was an instructor for Southwestern Line Constructors JATC. Most recently, John served as the Technical Reviewer for “The Guidebook for Linemen & Cablemen — Second Edition