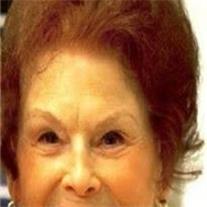 Our angel mother passed away Sunday, January 27, 2013. Joan Estelle LeDosquet was born on Jan. 23, 1925 in Williston, ND. After graduating from high school, Joan moved to Utah with her parents in 1943. She met Wayne Lafay Romney while applying for a job and it was love at first sight. They were engaged in December and married the following June. They had 3 children in Utah; moved to Phoenix in 1952 and had 3 more children. Joan was a wonderful mother and served in various volunteer capacities in the Church of Jesus Christ of Latter-day Saints. Joan took special care of Wayne when his health declined and he died in 1986. She was a widow for 14 years and surprised her children when she announced that she would marry Nicholas John Udall in February of 2000. They had 5 great years together until Nick’s passing in 2005. Sadly, Joan was also preceded in death by her son, Joseph Scott Romney in 2008. Joan’s family includes 6 children, Richard Wayne Romney (Kathleen Adair), Robert Alden Romney (Debra Larson), Diane Romney Vella (Joseph Vella), Joseph Scott Romney (Nicala Wanic), William Orin Romney (Stephanie Davis) and John LeDosquet Romney (Connie Singleton), 35 grandchildren and 56 great-grandchildren. Funeral services will be Saturday, Feb. 2, 2013 at 11 AM at the Church of Jesus Christ of Latter-day Saints Lakeside Ward, 1005 N. Voyager Dr., Gilbert, AZ. Visitation will be Friday from 6-8 PM at the Lakeside Ward building and also Saturday at 10 AM. Burial will be at Green Acres Cemetery Monday, February 4th. Arrangements by Bunker’s University Chapel