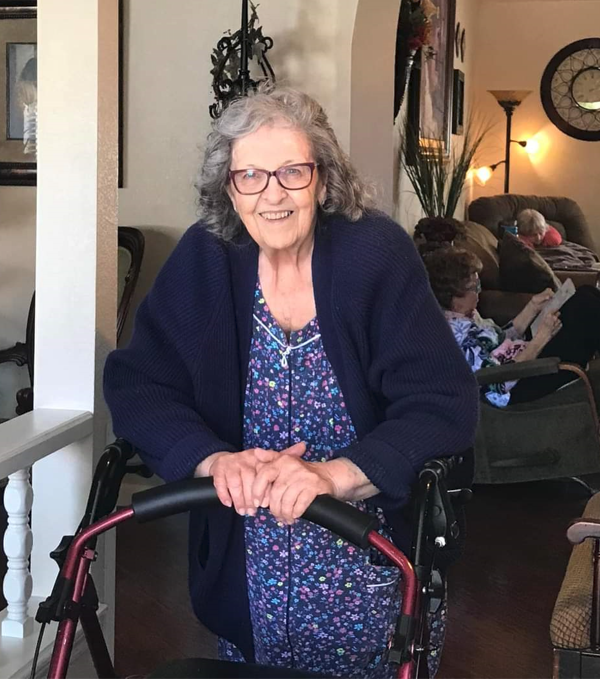 JoAn Aul Gibbons peacefully left the bonds of her earthly body and joined her husband and sons and numerous loved ones on April 4, 2022, in Mesa.

Memorial services will be held at 2 p.m. on Saturday April 16, at the Holbrook Stake Center, located at 1127 Helen Avenue.

JoAn was born on July 19, 1934, in Ramah, N.M. She was 87 at the time of her death. She was a longtime resident of Holbrook, having moved here in August of 1957 with her husband who was setting up his optometry practice. She lived here until 2006. Thereafter, she spent her time in Salt Lake City, Utah, Mesa, Arizona, and Saint John’s, Arizona.

JoAn was known for her beautiful singing voice, a talent she shared with many throughout her life. She was a fabulous cook and was called upon many times to provide meals. She could easily feed one or two or as many as five hundred with grace and ease. She loved acting in plays and carried the lead role in many musicals that were performed by The Painted Desert Players from the 1960s to the 1980s.

JoAn was a lifelong faithful member of The Church of Jesus Christ of Latter-day Saints. She served as young women’s president several times, camp director, Relief Society president, and primary teacher for many years. She served two full-time missions with the first being in Tampa Bay, Fla., and the second in Portland, Ore. She loved people and loved serving others. Her testimony of Jesus Christ was shared through her daily actions. She worked for the Joseph City Schools from 1981 to 1988 and then for the Holbrook School District until 2006. She also served as a member of The Navajo County Fair Board and worked for Dr. Sam Bowman.

JoAn was a friend to all and most everyone considered her their good friend. She loved this country and was very active in politics. In 1968 she was selected to represent Arizona in the National Republican Women’s Conference. Her children were thrilled to see their mother on national television in the large crowd of women in the convention hall.

JoAn was a good mother and a loving grandmother. Her grandchildren adored her. Her home was peaceful and full of love and it served as a refuge from the world. It was a place they would go to escape the pressures of life. She would sit with them and listen to them and they felt like the most important person alive when they were with her. She had a gift of making people feel special.

JoAn served as one of the “neighborhood moms” on the “hill”. There were 26 kids in the neighborhood and there was a daily visit or at least weekly stop made to her house from each one. They all loved her and the fun and crazy time that was had by all.

JoAn loved to wear her jewelry, have her hair fixed, and her lipstick was always in place. At the time of her death her lips were permanently stained pink because of the daily applications.

JoAn was preceded in death by her husband, Dr. Val Max Gibbons; and sons, Marion Todd and Gregg Alan.

She is survived by her five children, Valri Cherry (Sam) of Mesa, Debbie Karges (Kenny) of Holbrook, Brian (Sheryl) of Mesa, Eric of Pima, and Lisa Kinghorn (Kelly) of St. George. She had 30 grandchildren and 57 great-grandchildren.