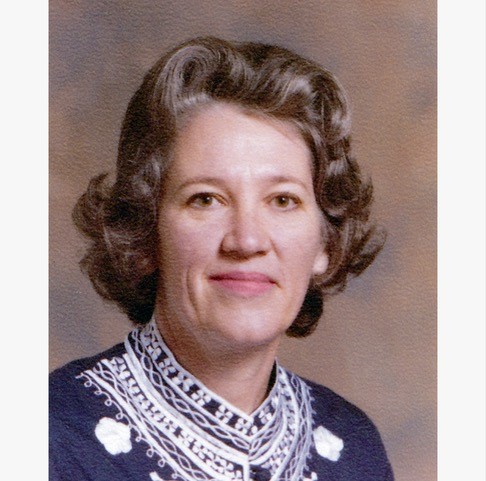 Joan Adele Mooney, 88, passed away on Saturday, May 29, 2021 in Mesa, Arizona.  She was born in Wickenburg, Arizona on July 17, 1932.  She was preceded in death by her loving husband, James Edward Mooney and her parents, Donald and Louise Westover as well as her younger brother James Westover.  She was the oldest of 5 children.  Joan married her sweetheart on January 20, 1954 and they were the parents of 6 children, two sons and 4 daughters.  She later became grandmother to 26 and when she died, was great grandmother to 52.

Joan, (pronounced JoAnn), was raised primarily in Yuma, Arizona where she attended Yuma Union High School and graduated in 1950.  She played piano beautifully and joined the band in High School. She also sang in several operettas, played the bassoon in the orchestra and marched as a majorette with the marching band.

Joan attended ASU and it was there she met her husband of 34 years.  She majored in early childhood education and graduated in 1954, then received her master’s degree in education some years later.  She taught as an elementary school teacher, teaching kindergarten in Arizona, Utah and eventually settling in California where she taught for more than 30 years.  She influenced hundreds of children with her creativity and love of learning.

Joan loved to sew, quilt and cross stitch.  She could do anything and did it well.  She was a valued member of her community and a devoted member of the Church of Jesus Christ of Latter-Day Saints throughout her life.

After her husband Jim, passed away in 1987, she continued to teach until retirement, and then moved to Hurricane, Utah briefly and then to Tempe/Mesa, Arizona to be closer to some of her grown children, where she has lived since 2012.

Joan is survived by her 6 children: Paul Mooney (LuAnn) of Mesa, Mark Mooney of Phoenix, Ruth Sessions (Dale) of Cedar City, Utah, Ann King (Art) of Upland, California, Gail Ellsworth (Steve) of Mesa, and Linda Mooney of Flagstaff, Arizona. Also, by her 26 grandchildren and her 59 great grandchildren.  She is also survived by 3 of her siblings, Nancy Christensen of Tempe, Carol Parkin of Salt Lake City, Utah and Bruce Westover (Vicky) of Orem, Utah.  The family wishes to express thanks to Marilyn and Kim Willis for their loving care of our mother over the past several years.

Mom loved flowers but if you would rather donate to a cause, she would have loved you to donate in her name to the  Alzheimer’s Association, ALZ.ORG.