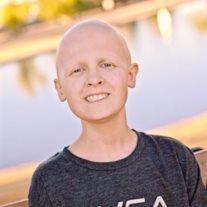 Jette Rhyse Davis, 13, was called home to his Father in Heaven Thursday, June 12, 2014 in Mesa, Arizona. He was born to Duane and Nicole Davis in Denver, Colorado on August 5, 2000. He fought Ewing’s Sarcoma cancer three times starting in August 2007 when he was at the tender age of 7. The cancer came back again in September 2012, and then again in January 2014.

Jette was a young man who expressed unconditional love in all those he came in contact with and was a true example of living a Christ-like life. He had a smile and laugh that would light up any room. Jette had a sense of humor and used it all the time to make others feel better, regardless of what he was going through. One -line zingers were his forte to capture anyone’s heart and immediately make them a friend. His spirit will surely be missed by all those who knew him.

In his short life Jette was able to turn a dream of a childhood cancer foundation into a reality naming it Jette’s Journey Foundation. This was a passion of his to help other kids going through cancer and help them feel better. Jette’s foundation website is www.JettesJourney.org. Jette is survived by his parents Duane and Nicole, older brother Codie, little sister Colette. Fly high our little fighter…God be with you till we meet again….

Visitation will be on Friday June 20, 2014 from 6-8 PM at Bunker’s Garden Chapel, 33 North Centennial Way in Mesa. Funeral services are Saturday June 21, 2014 at 10 AM proceeded by a visitation at 9 AM at The Church of Jesus Christ of Latter Day Saints, 19730 E Ocotillo Rd in Queen Creek.