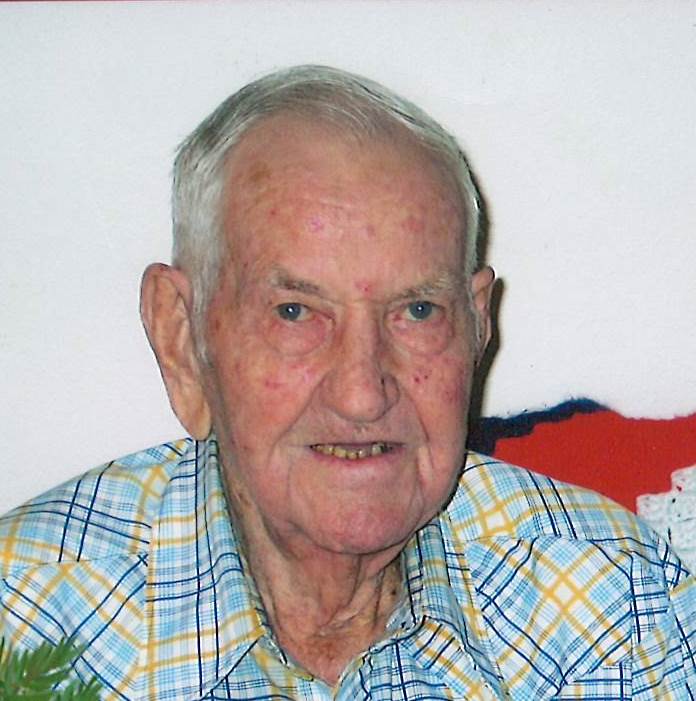 Jesse Ray Kerby, 102 years old, of Gilbert, AZ passed away September 3, 2014. He was born April 14, 1912 in Pima, AZ to Jesse and Florence Eugenia Wilson Kerby. He was the oldest of seven children and drove a team of horses, cared for fruit orchards, gathered fire wood and camped on Mt. Graham, and helped support his family while a young man. He worked in CC camps building roads during the Great Depression era. He was drafted into the army in 1944 and served two years with the Company C 743rd Railway Battalion in Antwerp, Belgium during WWII. When he returned from Europe he started working for the Southern Pacific Railroad in Phoenix, AZ. He was reacquainted with Mildred Cluff and they were married February 19, 1947. They had two daughters while living in Hayden, AZ. They transferred to Phoenix, AZ with the Southern Pacific Railroad in 1951, where three more daughters were born. Ray enjoyed serving in leadership positions in the LDS church. He was Branch President in Hayden and then served in family history and other church positions. Ray and Mildred served a mission for the church in Kodiak, Alaska. They moved to Gilbert, AZ in 1981 and served as Mesa Temple workers and served a mission to the Arizona Training Center in Randolph, AZ. Ray loved to raise vegetable and rose gardens, tend to his farm animals, and go camping and fishing with his family. He is survived by his five daughters, Barbara Ann Whitmer (John), Genevieve Kovacs (Tony), Shirley Rae Goodman (Benny), Lynette Stansbury (Jerry), and Debbie Jean Goodman (Randy), 30 grandchildren, 83 great-grandchildren, and youngest sister Nellie Bellamy of Austin, Michigan. Viewing will be Tuesday, September 9, 2014, 6-8 PM at Bunker’s Garden Chapel, 33 N. Centennial Way, Mesa, AZ. Funeral services will be Wednesday, September 10 at 10 AM at the Church of Jesus Christ of Latter-day Saints, Lindsay Ward Building, 1150 N. Lindsay Rd., Gilbert, AZ, with visitation at 9 AM. Interment will take place at the Greenwood Memory lawn Cemetery in Phoenix, AZ following the services. In lieu of flowers, the family requests donations be made to the LDS missionary fund.