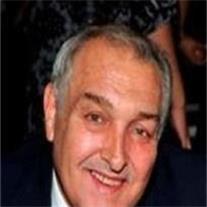 Husak, Jerry, 63, of Gold Canyon, passed away suddenly at his home on Monday, December 27, 2010, after suffering a heart attack. Jerry was born in Germany in 1947 and grew up in Syracuse, NY where he graduated from LeMoyne College with a degree in Accounting. Jerry served proudly with the United States Marine Corp. and was a veteran of the Vietnam War where his sacrifice earned him a Purple Heart after being wounded in combat. Jerry worked as an Accountant for General Motors for 30 years before retiring in 2001. He lived in Syracuse NY, Columbus, OH, Indianapolis, IN and Rochester Hills, MI before moving to Gold Canyon in 2003. Jerry had a strong devotion to his family and brought joy to those around him with his witty and undying sense of humor. He was an avid golfer who also enjoyed barbecuing and spending time with his wife, sons and grandchildren. Jerry was predeceased by his beloved son Mark, who died on December 5, 2010, his mother Anna, who died on December 11, 2010, and his in-laws Teodosia and Walter Kowerko. He is survived by his loving wife Orysia of Gold Canyon, his son Damian (Deidre) of Seattle, WA, his granddaughter Sidney, grandsons Hudson and Payton, his father Ewhen of Syracuse, NY, a sister Nadia (Roman) Iwachiw of Syracuse, NY, his brother in-law, Andrew Kowerko of Port Charlotte, FL, and his nephews Roman (Denise) Iwachiw of Washington DC and Olesh (Joselle) Iwachiw of Syracuse, NY. Visitation will be held on Monday, January 3 at 12:30pm at Bunker’s Garden Chapel, 33 N. Centennial Way in Mesa. A memorial service will follow at 1:30pm.