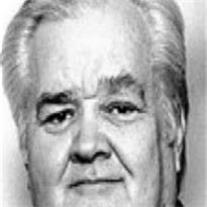 born November 13, 1950 returned to his Heavenly Father on Friday, April 1, 2011. He was 60 years old. He was a loving husband, father, grandfather, brother and son. The funeral will be held at the LDS Stake Center 2701 E. Lehi Road Mesa, AZ at 9:00 a.m. on Wednesday, April 6, 2011. A viewing will be held Tuesday, April 5, 2011 from 6:00 p.m. to 8:00 p.m. at Bunkers Mortuary 33 N. Centennial Way Mesa, AZ. He is survived by his wife Mary, sons Dustin, Adam, Devyn, and daughters Amanda and Shannon as well as eight grandchildren. He was a former State Senator and served well in his church and other callings. He was a successful business man, but his most important calling was his family. He will be greatly missed. We love you Dad.