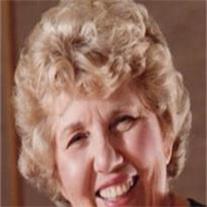 On October 20, 2013, in her 87th year, Jeanne Wright died peacefully in her home from complications due to age. Jeanne was born January 14, 1926 in Mesa, Arizona to Norma Guthrie and John Garnett Nix. She grew up on the N-X Ranch with her brothers and sisters and attended the LDS 2nd Ward in Phoenix.

Her early schooling was at Riverside School, a three-room schoolhouse, and graduated top of her class at age 11 from the 8th grade. She entered Phoenix Union High School at age 11. Despite her young age, Jeanne excelled in all her classes and participated in many extracurricular activities. One of her favorites was the Auditorium Club where her love for plays and musical shows began. During her senior year, her piano-playing talent blossomed, as she worked for Newberry’s in the sheet music department, playing songs for prospective buyers.

Jeanne graduated from PUHS in 1941 and then moved on to Phoenix College and finished her teaching degree at Arizona State College (now ASU). That first year, Jeanne would meet Jack Wright from Mesa, with his ‘now-famous’ smile and after dating a few years, they were married on June 22, 1944 in the LDS Arizona Temple. They were married for 56 years.

Beginning in 1948, Jeanne taught for six years at Mesa Irving and Alma Schools. Years later when people asked, “Were you a dancer?