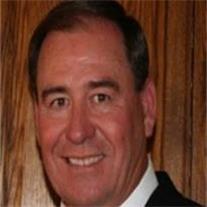 Jay William Douglas, 66, passed away on November 13, 2013 in Mesa, Arizona. Jay was born in San Pedro, CA on February 11, 1947 to William Shirley and E. Ann Douglas. He is survived by two sisters, Dianne (Andy) Culver and Lorraine (George) Stahlin. Although he always lived in the city, he was a cowboy at heart with a love for the outdoors and horses. He was well known in the copier world where he worked for over 40 years. In the early eighties, he and four partners built a successful office equipment company called Infincom, later sold to Alco Standard. This was his proudest business accomplishment. Jay loved people and people loved him as he generously served in the community and church all of his life. He was and will remain a beloved husband, father, and grandfather to his wife Lynn, daughter Corin (Mike) Wayne, and sons Jason (Laurie) and Justin Douglas and six wonderful grandchildren whom he leaves behind. Funeral services are Monday, November 25, 2013 at 11 AM, preceded by a visitation at 10 AM, at the LDS Preston Chapel, 6655 E. Preston Rd., Mesa, AZ 85215. Arrangements by Bunker’s Garden Chapel.