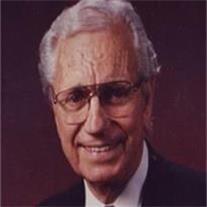 Jay Lavan Boyle, 89, passed away on December 30, 2012 at age 89. He was born on February 26, 1923 in Pima, Arizona, to Lavan Henry Boyle and Blanche Dodge. He grew up in Los Angeles, California, where he met and fell in love with Jeri Jones. In 1943 they were married for time and all eternity in the Arizona Temple of the Church of Jesus Christ of Latter-day Saints. He was 19 and she was 16. They remained happily married for 51 years until Jeri’s death in 1994. Jay graduated from Arizona State University in 1950, and he and Jeri moved back to Los Angeles where they raised a family of six daughters. In 1968 they returned to Arizona where they started and operated a successful home furnishings business for many years. Jay loved his family. He loved hunting and fishing and the outdoors. He loved music. He loved serving in the church. Jay is survived by his daughters April Montierth, Delores Wright, Robin Allen, Leslie Woods, Star Bailey, and Lyric Boyle, along with 25 grandchildren and 47 great-grandchildren. Funeral services will be held on Saturday, January 5 at 11 AM at the Mesa Central Stake Center, 925 North Harris in Mesa, Arizona, with a viewing at 10 AM that same morning. There will also be a viewing on Friday, January 4 from 6 to 8 PM at Bunker’s Garden Chapel, 33 North Centennial Way in Mesa.