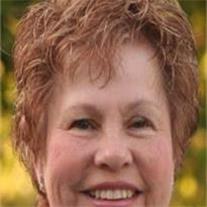 Janet Pearce Davis, loving wife, mother and grandmother, peacefully returned to her Heavenly Father on February 16, 2012, surrounded by her family. She was born in Bountiful, Utah to Stephen Keats Pearce and Ruth Robinson Pearce on March 26, 1948. After graduating from Bountiful High School, she attended the University of Utah where she earned her degree in English. She taught school in Salt Lake City and later on the island of Guam. She married Laurence Jackson Davis in the Salt Lake Temple on September 8, 1969. In 1975, she and Larry moved to Phoenix, Arizona which quickly became their home. Janet was active in the Church of Jesus Christ of Latter-day Saints. Her church service was an important part of her life. She was especially proud of the 12 years that she served the children in the church as president of the Primary organization. She also served in the Mesa Temple for many years. But Janet’s greatest legacy was her service to her family. She and Larry are the parents of 5 children, and grandparents of 16. An accomplished seamstress, Janet sewed wedding dresses for her daughters as well as for many friends. Each one of her grandchildren was blessed in an outfit sewn by her. She is survived by Larry, her husband of 43 years, her children Lisa (Trevor) Whitmore, Jennifer (Sean) Kriloff, Karen (Mark) Broadbent, Jason (Evonne) Davis and Kally Davis, her mother Ruth Robinson Pearce and siblings Robyn Steed and Stephen Pearce, along with 16 grandchildren.

In lieu of flowers, the family requests donations be made to Hospice of the Valley and the American Cancer Society.