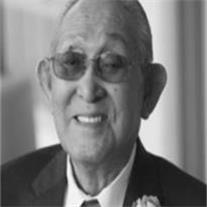 James S. Tomooka was born in Oso Flaco, California on May 16, 1922 and passed away on February 15, 2013. He is preceded in death by his loving wife, Kuniye; daughter, Mary Ann; parents Toyokichi and Yone; sisters Tsuyako Tanaka and Reiko Fujii; and brothers Masataka and Chikayoshi. He is survived by daughters, Nancy (Brian), Jeannie (Monte), and Stephanie (Randal); son, Glenn; and grandchildren, Megan, Ryan, Christina, and Kevin. He also leaves his sisters, Ayako Tomooka and Lillie Miyagishima; brother, Fred; and many nieces and nephews. Visitation will be held on Friday, March 1, 2013 from 5 to 8:00 p.m., Bunker’s Garden Chapel, 33 N. Centennial Way, Mesa, AZ. Services will be held on March 2, 2013 at 10:00 a.m., also at Bunker’s Garden Chapel. In lieu of flowers, donations may be made to Hospice of the Valley, 1510 East Flower Street, Phoenix, AZ 85014-5656.