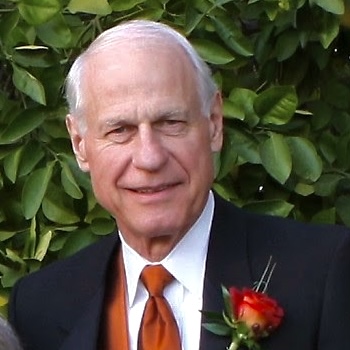 In loving and grateful memory of James Orison Rhead, Jr.

A large red parka, stuffed with apples and granola bars so we didn’t have to stop for lunch, is how we skied with our dad as he yodeled down the slopes, hurrying to catch one more ride before they closed the chair lift. He was a dad who buckled everyone’s ski boots and carried our skis, but made sure we took responsibility for remembering to bring our equipment by coming up with The Big Six: skis, boots, poles, hats, gloves, goggles. When we were too cold to continue on, he told us to be tough, but then rubbed our icy hands, and put his big warm gloves on them.

Our view of life began 12 feet in the air – but we always trusted Dad to catch us. He expanded our horizons by taking us on trips to fascinating places, seeing Shakespeare plays, or helping us build the largest sandcastle on the beach. The only times we complained were when we ran out of gas while driving to Utah because Dad refused to stop.

Jim, as he was known, was born January 14, 1939 in Salt Lake City, UT to “Tony” and Verda Rhead. He was the second of four children – Roberta Jackson, Mike, and Sylvia Merrill. This large man, who was such a large presence in so many people’s lives, passed away on September 15, 2022, surrounded by the family he loved. Every grandchild visited or called to express their love and thanks for the impact their grandpa had been in their lives.

Jim met the love of his life Karin Day at South High School and continued dating while attending the University of Utah. They married in the Salt Lake Temple in 1961. Jim and Karin have six children, Elizabeth, (Rod Brown), Kristen (Doug Sweeney), James (Kristin), Alisyn (Steve Owen), Jill (Wayne Mortensen), and Amy (Steven Offen). He and Karin also have 26 amazing grandchildren, and 20 adorable great grandchildren, who are almost as good-looking and smart as him – with two more on the way.

Jim relished his time with family. You could find Jim cheering on, or coaching his kids on the baseball or football fields, the basketball and volleyball courts, at a swim or track meet, the tennis court, or in the stands of the football field watching his girls cheer. And the support didn’t end when grandchildren came along. He loved to hear and join his family in singing, even when Mom had to pound his note a little louder on the piano. He was proud of everyone’s musical abilities and academic accomplishments. He didn’t carry a megaphone, but he was everyone’s biggest cheerleader.

His love of basketball made the gym his second home – and ours all too frequently. He loved the old joke that there will be basketball in heaven because the scriptures talk about the courts on high. He had many proud basketball achievements in his life. He helped take the University of Utah team to the Final Four in 1961. He was selected to play in the College All Star Game in 1961, which his West Team won. He continued playing on church teams, with city leagues, and with various Senior Olympic teams until Covid hit, which forced him to quit playing at the young age of 81. After suffering from Alzheimer’s Disease, he will now be free to play again.

His large head was filled with so much trivia and knowledge, we all used him as a resource before Google existed. In his arsenal were a lot of not-so-great jokes, plenty of puns, and The Grinch in its entirety. Losing at Trivial Pursuit and hearing phrases like “make a note of it” and “it’s just one of those things you pick up along the way” became a part of our lives.

Jim graduated from the University of Utah with honors in 1961, where he served as Freshman Class President. He went on to earn a Masters in Business Administration from the U of U in 1962. He could read 1,000 words a minute, and was proud that he taught speed reading to The Honorable Sandra Day O’Conner prior to her term on the United States Supreme Court.

He served one year in the Army when his National Guard unit was called up during the Berlin Crisis. And of course, he played on the base’s basketball team. He eventually made his way to Arizona after being hired by Western Savings and Loan. Later he became President of Paragon Hotels, developing and managing hotels and resorts.

At night we held hands for family prayers and passed a squeeze Dad started afterwards before hugging each other goodnight. Over the last ten years you may have been warmly greeted in the hall of the Arizona Mesa Temple of the Church of Jesus Christ of Latter-day Saints. His testimony of the Savior was known by all who knew him. He served faithfully in many ways at church, such as Bishop of the Phoenix 16th Ward, working with the youth, and teaching seminary and the gospel doctrine class. We teased him that there were so many markings and notes in his scriptures they were difficult to read.

One of Jim’s gifts was his love for others, making people feel good, and inspiring them to be better. He was big in stature as well as in heart, humor, love, fun, adventure, generosity, and faith. He embodied the scripture in John 13:34-35, “A new commandment I give to you, that you love one another; as I have loved you, that ye also love one another. By this shall all men know that ye are my disciples, if ye have love one to another.”

His large presence will be missed on this earth. But we know Jim is having a wonderful time reuniting with good friends, and beloved family members, including his parents, his sister Sylvia, and his sons-in-law Doug Sweeney and Curtis Randall, as well as all the family he never knew. Heaven will now be filled with his good sense of humor and friendly smile. Thank goodness the eternities are a long time, because he will have many people to greet and tell stories with – and this gives us great comfort.