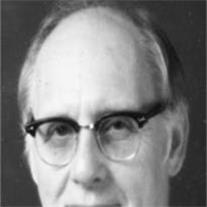 He was a veteran of WWII, where he served as a PT Boat Technician, and was on the beach at Normandy June 6, 1944 when the allied troops landed. He graduated from the University of Colorado with a Bachelor’s of Science Degree in 1949, and later received a Masters Degree from South Dakota State University.

He worked for newspapers in Nebraska, Colorado, Oklahoma, Missouri, Texas, South Dakota, Pennsylvania and Connecticut. After 18 ½ years in the newsroom he began a career in education. Neal became a university instructor in 1967. He taught for four years at South Dakota State University. In 1971, he accepted a teaching position with the University of Nebraska Lincoln’s School of Journalism. During his tenure Professor Neal taught courses in the areas of Newswriting and Reporting; Editing and Communications Law. In 1976, Neal co-authored with Suzanne S. Brown “Newswriting and Reporting (Iowa University Press, Ames, Iowa). The textbook shows the novice reporter how to recognize a news story, get the necessary ingredients, put them together properly and polish the finished product. The textbook is still in use today in classrooms around the world.

Neal served on the board of directors for the Nebraska Civil Liberties Union and later on the Union’s Arizona board.

He was preceded in death by his wife Caroline Dorothy Becker Neal, and his son Charles Taylor Neal. He is survived by his son, James W. Neal, his daughters Jody Ann Neal and Carolyn Sue Sweeney, 10 grandchildren and 11 great-grandchildren.