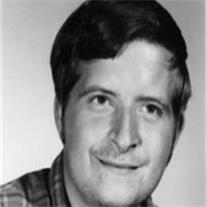 We announce the death of our beloved cousin, a favorite family member, and friend, James Livingston. James Edward Livingston, age 58, died on December 25, 2009. James was a resident of Gilbert, Arizona for fifty years. James was born in Phoenix, Arizona. His parents Bill and Iva Lane raised him as their foster son until Iva’s passing at age 97 in 1998. James is remembered by his family and friends for his kind heart, gentle spirit, intelligence, responsibility, reliability, perseverance, and loyalty. Examples of James’ character: when his mom was placed in a nursing home at age 92, James walked 5 hours each way, a total of 10 hours every Tuesday and every Friday to spend the day with her. He left his home in Gilbert at 3 a.m. and was at the nursing home, in Mesa by 8 a.m. to have breakfast with her. He spent the day there, had dinner with her at 5 p.m., and then walked home, arriving at home at 10 p.m. On Sundays, his Pastor Hugh Middleton picked James up at his home in Gilbert then drove over to pick Jim’s mom up at the nursing home so they could worship at Baseline Bible Church. Pastor Middleton, aided by Jim and his Mom and other church members built Baseline Bible Church from an old dairy to the beautiful place of worship it is today. After his mothers’ death, Jim continued to visit residents of the nursing home who were alone in this world. He preferred walking to get there as he did not like public transportation. Throughout his adult life Jim was seen walking the streets in Gilbert, helping people in need by shopping for them, visiting them and feeding them and their cats. James cleaned his church as a volunteer for many years. He also did gardening for a living for a number of years. James suffered a heart attack on June 2, 2009 followed by a stroke with complications a few weeks later. He will be sorely missed by everyone who knew him. The family wishes to thank the people in Jim’s life who helped him on his medical journey. They include: his dentist Dr. DiMaggio, and staff at Dr. DiMaggio’s office. Also, his doctors at Banner Heart Hospital, Dr. Armita Gupta, Dr. Donald Polansky, Dr. James DelGiorno, Dr. George Walker, Dr. Jaime Ibarrola, Dr. Rodrigo Chan, and the wonderful nurses and staff at Banner. We also thank the staff at Springdale West Rehab Center and the staff at Springdale West Nursing home for their care and concern for James. Hospice of the Valley provided comfort care to James during the last days of his life and we express our appreciation to them. We also thank Dr. John Carmola and Dr. Sharon Stafford for their support. James is survived by his loving cousins Don and Marie Clement of California who felt he was more like a brother than a cousin. Also, cousins Tim, Linda, Brian, Zachary, and Christopher Clement of Modesto, California. And cousins Chris, Teri and Kennedy Clement of Kyle, Texas. He is survived by friends who also served as his support team during these past 6 difficult months. Ruby cCown, Bill Willard, and Hal Polston. The funeral service will be held on Thursday, January 7, 2010 at 3:00pm with viewing at 2:30pm at Bunker’s Garden Chapel, 33 N. Centennial Way, Mesa, Arizona. If you want to make a donation, Jim’s family requests you show friendship and kindness to others as you remember Jim; or start a BEST Buddies chapter in your school. For more information, go to www.bestbuddies.org.