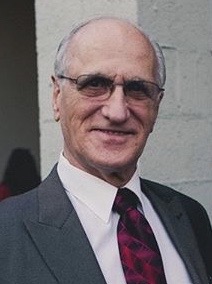 James Knytych of Gilbert, Arizona; passed away July 27, 2020 at the age of 85.  He was born on July 17, 1935 to James G. Knytych and Mary Loyek in Chicago, Illinois.  He graduated from Calumet High School in Chicago in 1953.  James lived in Oak Lawn, Illinois until he was drafted into the army at the age of 18 following his twin brother Joseph.  After his service, he received an honorable discharge.  James then started his career working for AT&T/Mountain Bell, and retired from them in the 1980’s.  He would later work for and retire for SRP.

He met his first wife, Dorisjean in Chicago and they had two kids; Greg, their biological child, and Charlotte, whom they adopted as a baby.  The family moved to Arizona in 1967.

James was a very loving, compassionate, smart, successful, and humorous person, who presented a goofy persona at times.  He was loved and respected by anyone that knew him.  James was the adventurous type, who enjoyed the outdoors.  He also enjoyed reading and building a wide range of projects for his family and friends.

After retiring, he began his next adventure and purchased a 1972 Piper Cherokee plane, which he later refurbished.  He made several cross-country trips, including Alaska.  He loved to travel with his sister as a co-pilot on multiple trips.  He shared his love of flying with other family members, including his grandchildren.

He is survived by his sister Rosalie Draper; Children: Greg, Darla, Rodney, Jeff and Mark; 20 grandchildren; 14 great grandchildren and several nieces and nephews.

He was preceded in death by his parents (James and Mary), twin brother, Joseph and daughter, Charlotte.

A memorial service in his honor will be privately held at a later date.  In lieu of flowers, or other offerings, please donate to a charitable organization of your choosing in his honor.