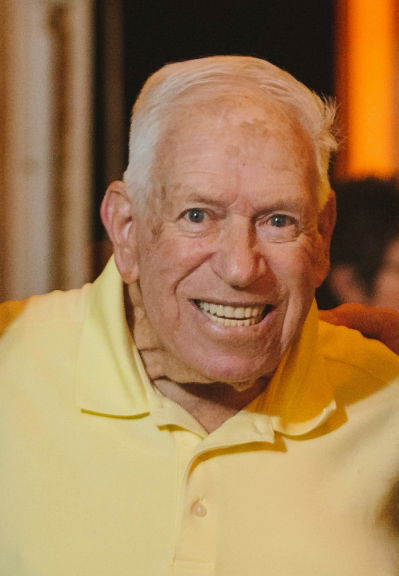 James “Jim” Poole passed away peacefully on November 7, 2021 after a brief bout with cancer. Born just outside Nashville, Tennessee, Jim spent a majority of his life in California and Arizona, moving just a few years ago to Blacksburg, VA to be closer to family.

Jim was an incredible athlete playing both basketball and baseball for San Diego State University. He was honored to have his baseball jersey retired as one of the top pitchers in school history. Following graduation, he went on to participate as a member of the winning USA Basketball Team for the 1955 Pan American Games earning a gold medal. He followed that as a member of the All Air Force Volleyball Team in 1957, during his time serving in the Air Force competing in the Armed Forces Sports.

Jim became a world-class, international badminton champion and one of the most decorated players in USA Badminton history. He was the number one-ranked singles player and number one-ranked doubles player (with partner Don Paup) throughout the 1960s and early 1970s. His 65 United States Championships are the most for any badminton player and his record of winning his first in 1958 and his last in 1979, a span of 21 years, remains the longest of any player in USA Badminton history. He won numerous European and Canadian titles and was the World Champion in the over-55 age group in 1987. His most cherished victory was winning the Malaysia Open in 1961, as he was the first victor from a non-Asian country. He remains the only American player to win this elite tournament. He also played for the US National Team (Thomas Cup) from 1958-1976 (even coaching several teams) traveling all over the world. In 1970 he was elected into the USA Badminton Hall of Fame now known as the Walk of Fame.

As his badminton career was winding down, his football officiating career was reaching its pinnacle as he worked for 20 years on the field for the National Football League (1975-1995) being honored to officiate Super Bowl XXI (1987) and Super Bowl XXVII (1994). After retiring from the field, Jim worked briefly as a supervisor in New York City before returning full-time to Sun Lakes, Arizona where he continued to be an NFL trainer and then an observer for the Arizona Cardinal games for many more years. During his retirement years in Arizona, Jim naturally became a scratch golfer and won a couple club championships.

Jim met his wife of 53 years, Sue, during his time in the Air Force. Jim and Sue loved traveling and spending time with their family. Sadly, Sue passed away in 2013. Jim is survived by daughters Kelly (Mark) and Lisa (Jeff), and son Jon (Kathleen), seven grandchildren Melissa (Matt), Kristin, Carly (Geoff), Kenny, Ricky, Kyle, McKayla, and one great grandchild Wyatt.

There will be a graveside service on 11/23/21 at 2:00pm at Mountain View Cemetery in Mesa, AZ. Rev. Jonathan Arnpriester of Chandler United Methodist Church will be presiding. The family is welcoming guests for a reception immediately following the service.