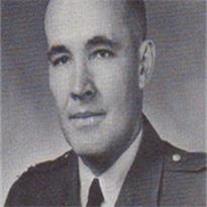 Col. James F. Warnock, Jr. (ret), our dear husband, father, grandfather and friend, passed away from causes related to stroke on Sunday, November 7. He was born March 13, 1926, in Phoenix, Arizona. He was a veteran of the Korean War, during which he was awarded a Purple Heart for injuries sustained in action, and served two tours of duty during the Vietnam War. Jim was awarded the Legion of Merit, three times and served as a member of the Organization of the Joint Chiefs of Staff and served on the Army Staff. He loved his country. Following retirement from the Army in 1974, he served the State of Arizona as Director of the Solar Energy Research Commission until 1987. He is survived by his wife of 61 years, Margaret Udall Warnock, daughters Ann Johnson (Scott), Karen White (Tom), Mary Grass (Bill), and Patricia Johnson (Mike), and son Jamie Warnock (Noreen). He is also survived by 13 grandchildren. Funeral services are Friday, November 12, 2010 at 10 AM preceded by a visitation at 9 AM at the LDS Mountain Vista Ward, 10305 East Southern Ave. in Mesa. The family is especially grateful for the kind care given Jim by Grace Hospice and the Copper Cottage Hospice House in Mesa during his final days. In lieu of flowers please send donation to Grace Hospice.