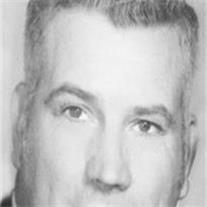 Jack C. White, 81, died Tuesday Nov 9, 2010 in Mesa, AZ. He was born in Wabash County, IL to Sereno and Violet Seibert White. He was the president of the FFA in high school and helped with the family farm. After graduation Jack continued to farm with his father and had a variety of jobs including working as a Culligan man, a gas station attendant and then a mechanic and later a foreman at the Ford dealership. Jack also joined the Mt Carmel City police force as a police officer. He married Leila Jean Witsman of Mt. Carmel and they had three children together. He moved to Phoenix, AZ in 1962. Jack worked at Al Klunder’s gas station in Maryvale, where he met his current wife Verlie Nelson. Jack worked at the Phoenix Water Plant for over 25 years. He was willing to help anyone put on a roof, paint a house, or fix something that was broken. He loved helping others and was generous with his time and means. He was a playful tease to those he loved. No one was a stranger to Jack. Jack was a member of the Church of Jesus Christ of Latter-day Saints and worked into his seventies with the cub scout program. He loved teaching boys how to work with wood, power equipment, and how to build things. Over the years he developed a great love for family history and spent many hours searching and working on his geneology. Jack is survived by his wife of 43 years Verlie Nelson White and his children Jack White Jr. (Teri), Jane White, Jean White (Joan), Bob Nesbit and Frances Davis (Don), 23 grandchildren, 35 great-grandchildren and 15 great-great grandchildren. A viewing will be held on Friday, November 12th from 6-7:30 PM at Bunker’s University Chapel, 3529 E. University Dr. in Mesa. Funeral services will be held at 10.00 AM on Saturday November 13th at the LDS Church on 616 S Extension Rd. in Mesa, AZ.