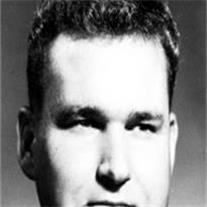 Jack C. Fletcher, 74, of Mesa, Arizona died Monday, January 18, 2010. He was born October 26, 1935 in Chandler, Arizona, the 3rd of four children born to Cecil Clifton and Vera Mae Stapley-Fletcher. Jack was a graduate of Mesa High School and Arizona State University. He served in the US Navy on the Destroyer USS Hanson. Jack worked from 1962 to 2004 in the title and trust field, primarily as a plant manager. He is survived by his two children Chris and Carrie Fletcher, a brother Darrell and granddaughter Cassidy. Funeral services will be Saturday, January 23, 2010 at 12:00 PM preceded by a visitation at 11:00 AM at Bunker’s Garden Chapel, 33 N. Centennial Way in Mesa. Interment will follow at the City of Mesa Cemetery. In lieu of flowers the family suggests donations be made to Hospice of the Valley Friendship Village, 480-831-3281.